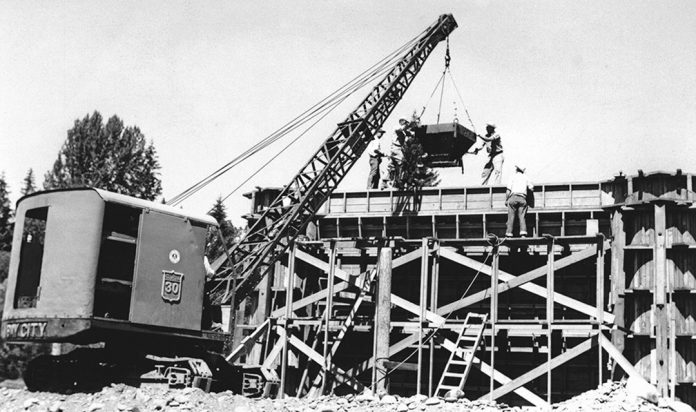 Pictured here in the late 1940s is a Bay City Model 30 crane hoisting concrete at a building site.

One notable machine built by Bay City Dredge Company around 1915 was a rail mounted dredge designed to help drain the swampy areas of the Southern United States.

One restored unit is still displayed alongside the Tamiami Trail highway in Southern Florida.

Having been renamed Bay City Shovels Inc. early on, they produced half-swing shovel gas-powered models and by 1930 had built a fully revolving three-quarter-yard capacity machine with available backhoe, boom and shovel front attachments.

Bay City always assigned model numbers as per weight of the machine. For example, the Model 30 pictured here weighed 30,000 lbs.

Interesting to note is the lack of safety equipment for the workers during this era. Lack of hardhats and fall arrest devices didn’t seem to deter getting the work done but at the peril of the workers.

They certainly had to have ultimate confidence in the crane operator’s ability.

This article is provided by the Historical Construction Equipment Association (HCEA) Canada. HCEA Canada is a Proud Community Heritage Partner of the Simcoe County Museum. 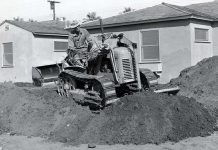 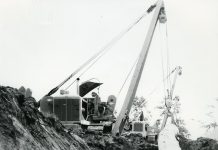 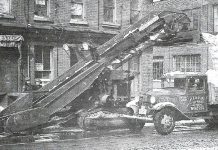 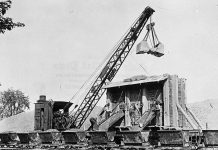 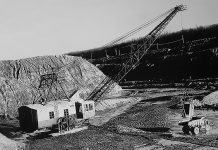 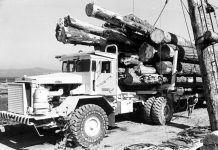 Alberta-based AMG expands Sandvik partnership into the US