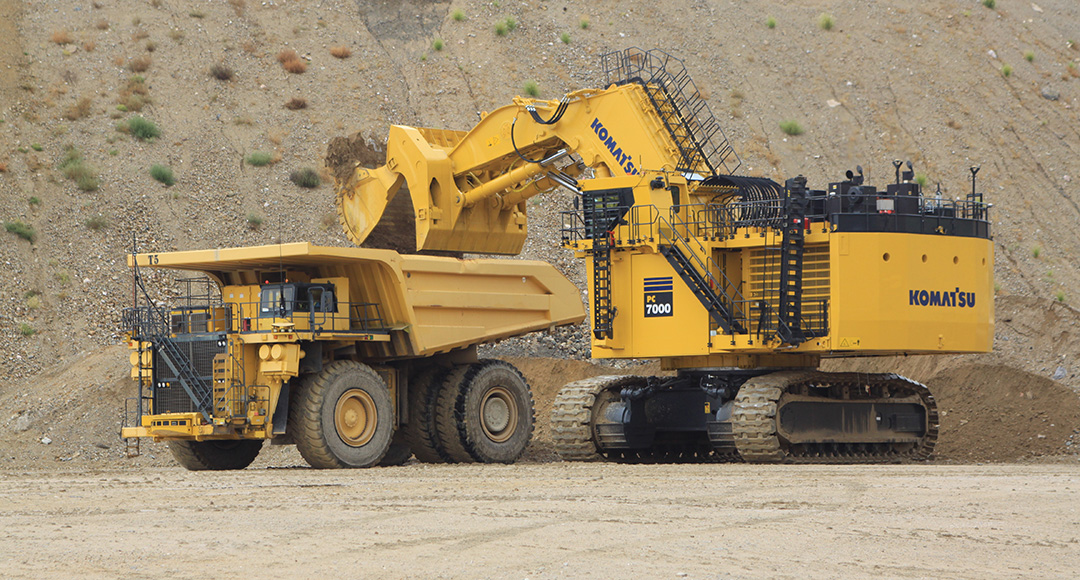 With more than 130 autonomous trucks in operation, Komatsu continues to push forward with automating global mine operations

In 2005, the company began trials of its Autonomous Haulage System (AHS) at Codelco’s copper mine in Chile. The system officially launched commercially at the same mine in 2008.

Later that year, Komatsu completed its second successful deployment of the autonomous trucks at Rio Tinto’s iron ore mine in Australia.

Today, more than 130 of Komatsu’s autonomous trucks are in operation in the Chilean copper mine, the iron ore mine in Australia and in Alberta’s oil sands.

To help mark the AHS milestone, Komatsu recently invited media to visit its Arizona proving grounds, where the company continues to develop its autonomous technology.

“Over the years we’ve developed a lot of practical knowledge, building more than 170 autonomous trucks and having more than 130 in the market today operating,” said Brain Yureskes, Komatsu’s director of global business development for large trucks.

Alongside the AHS 10-year milestone, Komatsu is also celebrating a cumulative total of 2 billion tonnes of material hauled, as well as zero serious injuries.

“Removing some operators from exposure to the risk is going to inherently improve the safety of the mine site,” Yureskes said.

“These benefits mainly come from the fact that the trucks are operating within the design envelopes, there’s no human variability in how they’re operated,” Yureskes said.

With an autonomous system, mine operations are able to have absolute control over where material is moved as well as consistency in haul times. The repeatability of the system equals improved productivity as well as lower operating costs.

“Most if not all of this is going to be predictable and repeatable,” Yureskes said. “It keeps mine planning and budgeting very predictable. It improves the overall stability and efficiency of the mine site.”

However, Yureskes notes autonomous hauling isn’t capable of removing inefficiency from an operation.

“If you have, for whatever reason, a lot of junk in your haul road or too many intersections or just poor road planning, you’re not a great candidate for autonomous haulage,” he said. “When you automate junk, you just get automated junk.”

To manage AHS, the system uses two applications; Frontrunner, which controls the truck, and Dispatch, the fleet management system that assigns tasks to the vehicle.

“Those two applications talk to each other,” said Anthony Cook, vice president of autonomous and communication solutions for Komatsu’s Modular Mining Systems. “Dispatch doesn’t care if the truck is manned or autonomous, its treating that truck as an asset.”

The control centre for the two applications may be located on or offsite, and as little as two operators are able to manage a fleet of vehicles.

“One operator, if he’s confident, can probably do about 30 trucks,” Cook said.

Yureskes explained the integration of Frontrunner and Dispatch is a key advantage of the Komatsu AHS system.

“The big misconception with autonomous technology is this is a simple bolt on remote control that you put on a truck and tell it where to go,” he said. “This is a true system, rather than just tech you add onto the truck.”

With 10 years of AHS commercial deployment, the mining community is accepting the technology, and Komatsu said the number of inquiries into the system is increasing.

“Before it was the T1 customers that have more assets,” Cook said. “Now we’re getting into the T2 customers who are looking at if they should make their fleet autonomous.” 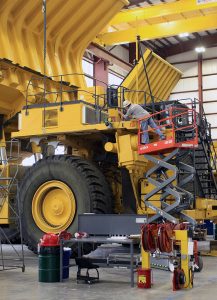 With mine operations accepting the notion of autonomous haul trucks, Komatsu is developing a new vehicle that eliminates the operator’s cab all together.

“Customers familiar with autonomous are now comfortable without having the driver there,” said Joe Shoemaker, senior product manager for electric drive trucks. “With the cab comes extra costs. This will hopefully be a push for customers to move into the next phase of autonomous.”

Dubbed the Innovative Autonomous Haulage Vehicle, Komatsu is testing its capabilities at its Arizona proving grounds.

The absence of the cab means the truck doesn’t have a front or back end and can travel in either direction.

“It reduces the amount of time you need for spotting and turn around,” Shoemaker said.

As well, the concept truck is built with four wheels rather than six, and weight distribution is split 50/50 between the two axles, rather than the traditional 70/30.

Komatsu has only built one of the cabless trucks so far, and a commercial release date is unknown.

“This is really a concept machine so far, we’re just doing testing and learning a lot about the machine,” Shoemaker said. “A lot of customers are saying they’re ready to move onto the next phase.  I think this gives them a good idea of where Komatsu is moving in the future and shows we’re progressing with autonomous.”

Throughout the 10 years of commercial AHS operation, Komatsu has developed numerous mining-specific applications to tailor the system to its customer base.

In the oil sands in Alberta, Suncor Energy is operating a fleet of 20 autonomous trucks. The autonomous haul system was tweaked to help preserve haul roads.

“The spring break up is critical for them. That’s when things thaw out going into summer, and all the roads turn to porridge,” Cook said.

“I can stand in the rut basically, it’s not what you want,” Cook said.

To avoid digging ruts in roads, multi-trajectory routes were created within the autonomous haulage system. Rather than drive on the exact same path, the truck’s route is slightly adjusted to spread out wear on the road.

“We have multiple paths we put the same truck on so that it doesn’t end up going the same path and wearing a rut in the road,” Cook said.

“That was designed specifically for the oil sands operations.”

JLG expands the capabilities of its augmented reality mobile app 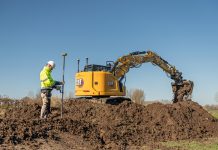 The evolution of the WBM wedge-style coupler