If you’ve ever questioned whether or not hard works pays off, look to Schouten Excavating.

Calvin Schouten, 24, and Wiebren de Boer, 35, became friends after meeting on a school building excursion in Haiti. They became partners a little more than four years ago when they created Schouten Excavating, based in Watford, Ontario.

“We were running a machine in the past and we decided to go out on our own. We started small and just kept pushing. We just kept growing as fast and responsibly as we could” Schouten said.

“We learned some stuff the hard way, but a lot of it is if you’re willing to work, the work is out there. We are definitely willing.”

The business began by tackling general excavation, property line clearing and some farm demolition with a single excavator.

“We hauled the first machine around on a trailer from our farm tractor,” de Boer said.

By the end of their first year, they purchased a second excavator, and by the following spring they hired their first employee.

Today, the company has grown to include 25 employees, 10 excavators, a rock truck, an impact crusher and several compact machines.

However, their focus has shifted from excavating to demolition and crushing projects. 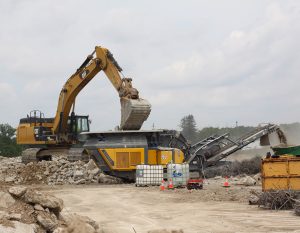 “We liked the work and demolition was kind of an underserviced market in our area,” Schouten said. “Now we’re kind of specialized in demolition and concrete processing. We still do some excavating, but it’s not our main focus.”

Breaking into the demolition industry was a difficult task.

To be allowed to bid on larger projects, Schouten Excavating needed a bonding company willing to back them.

“There’s 1,000 hurdles you have to jump over,” Schouten said. “We had to do projects for the limit the bonding company would give us, even though it was under cost, just to get our foot in the door,” de Boer added. “But we found a great bonding company. They back us very heavily now.”

With the right backing in place, Schouten Excavating has now tackled demolition projects from hospitals to schools to police stations across Ontario.

Now, Schouten Excavating is tackling its largest crushing project to date; the former St. Thomas Assembly Plant in Southwold, Ontario. The former Ford plant closed its doors in 2011, after producing about 8 million vehicles in its 44 years of operation. Demolition of the 635-acre site began in 2015.

To complete the job in about 88 days, Schouten Excavating is using a single Rubble Master RM 100GO! tracked mobile impact crusher. They purchased the machine last year — an upgrade from their previous RM80GO!. 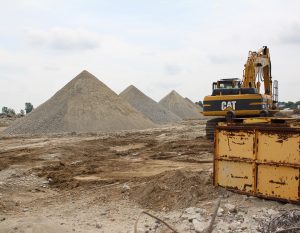 “Rubble Master has done a good job of making a compact crusher that can produce a lot of tonnage,” Schouten said. “We’ve tried crushers that are twice the size that do the same tonnage as the RM100.”

The RM 100GO! boasts an output of up to 250 tonnes per hour, depending on the material. With an inlet opening of 95 cm by 75 cm, the impact crusher is equipped with two or four hammers and three rotor speeds.

“It looks deceiving, but pretty soon people realize that when you’re pushing out 100 to 120 tonnes an hour it can do the work, and it can do it efficiently. That’s what we like about it,” Schouten said.

As well, the impact crusher is powered by a six-cylinder John Deere diesel engine with 235 kW at 1,800 rpm.

According to Rubble Master, the diesel-electric drive system reduces operating costs by up to 30 per cent and the optimized impact plate geometry ensures high throughput and high-quality aggregate that may be reused immediately.

“For steel and rebar, nothing beats the Rubble Master for that. It’s amazing what you can put in that machine and what comes out,” de Boer added.

On the business end, Schouten takes care of the day-to-day operations, employees and customers, while de Boer handles the financial side of the company and oversees the office.

“That’s how we keep our roles separate, it works well. We complement each other as far as skills and weaknesses,” de Boer said.

Within the company’s ranks, Schouten Excavating employs staff members ranging from 18 to 67 years old. Although the common jobsite complaint about millennial workers revolves around work ethic, the 24-year-old Schouten said it isn’t an age-related issue.

“It’s not an age thing, it’s attitude,” he said. “Not all kids have no work ethic, there’s some out there that are very good. We’ve had old guys that were no good, and young guys that are really good.”

When it comes to future growth of the business, both de Boer and Schouten agree their current workload is manageable.

“We want to be efficient as we can be at this size before we move on. If you start becoming inefficient, you start missing things on jobs,” de Boer said.

Outside of their demolition and crushing business, de Boer and Schouten also farm chickens and cash crops. They take care of their farms before heading to their jobsite.

“We like what we do, so every morning when you get up, it’s pretty easy to keep doing it,” Schouten said. “Not every day is good, there’s bad days and good days. But we have a vision and we want to achieve that.” 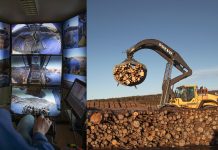 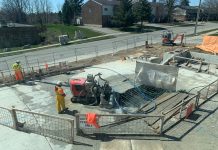 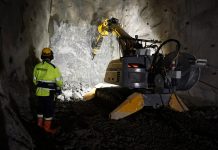 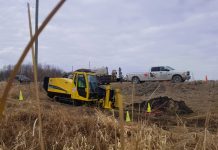 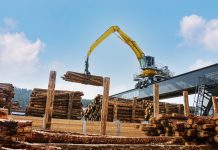 Here’s how the 2018 Winter Olympics bobsled track was constructed