Rubble Master is taking its RM GO! line to the next level with the introduction of RM GO! Next.

In recent months, Rubble Master and Maximus have been working on an RM innovation in the screen sector: the new fully electrified hybrid screen RM MSC8500e.

The new hybrid screen was developed on the basis of the tried-and-tested RM MSC8500M screen unit. All the hydraulic drives have been replaced with electric ones and only the crawler gear remains hydraulic.

Rubble Master has channelled 30 years of experience of electrical drive engineering into this screen. Components have been integrated that were developed specifically for Rubble Master in order to create powerful and robust hybrid machines.

All the engineering innovations add up to single source crushing, a Rubble Master first: the screen can be powered through the new RM 120GO! next hybrid crusher.

Both crusher and screen can operate from a single power source. The crusher’s high-power generator supplies the electricity without the need for an additional diesel engine. This reduces emissions and noise levels.

The customer has more mobility and flexibility than ever before when using the equipment because, apart from the single source crushing, the hybrid screen can also be operated by a diesel engine or other external power sources. Flexible operation in isolated areas, in halls or in mining is possible and is adapted to the needs of the job in hand.

Rubble Master also took the new tech further by  allowing the screen and crusher to communicate with each other without wires or cables.

In addition, on the RM MSC8500e, a full-featured radio remote control system with display is used for the first time. The model is familiar to the RM 70GO! and RM 90GO! and performs all functions, meaning the operator need not enter the danger area around the machinery during operation. With these safety standards Rubble Master follows the principles of RM GO! Next.

RM GO! Next is the logical continuation of the RM GO! principle. Notable features are even more intuitive machine operation and further improvements to access points for maintenance and repair work.

“Our crushers and screens communicate with the operator either directly by means of light signals or via the RM GO! SMART app,” said Rubble Master founder and CEO Gerald Hanisch. “In this way, the operator can monitor the plant directly from the digger cab and sees the most important indicators at a glance without having to enter the machine’s danger zone. We aim to make our crushers and screens even safer with RM GO! Next.”

This was achieved on both the new RM 120GO! Next and the hybrid screen by means of the radio remote control, the new Operations Assist and the multifunction wired remote control.

The Operations Assist in particular makes communication between humans and machinery easier.

LED lights in three colours (green, yellow, red) show the operator the machine’s current status. Essentially, these machine communication lights distinguish between operation, service and alert and are standard features on RM 120GO! Next and the RM MSC8500e.

“The app provides live data on the machine, daily reports and, in the event of problems, instructions on remedying the fault direct to the smart terminal,” Hanisch said.

“This makes maintenance and spare parts management much easier.”

A new feature that resulted from the development of the hybrid screen is that every fraction can be weighed individually by means of integrated belt scales. Up to four weighing points are possible and provide real-time data via the app. The RM Partscout offers a glimpse of the future of spare parts management. With this new RM app, it will be possible in the future to scan the required spare part with a camera phone.

The app automatically recognizes which part is required, enabling the operator to order it on his smartphone from the 3D online spare parts catalogue directly from the building site. 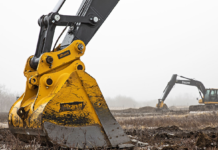 Majority of equipment manufacturers have positive outlook for 2021